Blacksmith Story-Pixel Game v3.2.0 build 19 mod Apk [ In the ancient age, God created all things and pour Orbs in them. Intellectual orbs became human while evil orbs became devil.Human and devil didn’t see each other,an age of peace has come. ] [ Things changed as time gone by.Devils came up all of a sudden. Found no weapon to fight back with, Human who got used to peaceful life went into a panic. ] [ The king encouraged the heroes to fight,while gave generous rewards to the blacksmiths making excellent weapons. You, a retired hero,seized this chance and bought an abandoned blacksmith shop with all your fortune. ]

This game is a combination of strategy game, RPG, management game and idle game. Players play as the boss of a blacksmith shop who helps heroes to defeat monsters by researching, forging and selling weapons, as well as employing workers to explore and exploit mines.

Different from traditional RPG games, players do not give direct battle command to heroes. The result of the battles depends on whether the players could provide proper weapons to heroes. Every weapon has its particular effect on particular monster. Experienced heroes with first-class weapons would be invincible, while heroes of low level with proper weapons may also show great fight capacity.

Features of the game:

– Over 209 types of weapons, 233 heroes, 68 fighting skills, unlimited strategy.
– Fight against 115 types of monster through 160 stages.
– Special events keep coming up, making the game fantastic and real.
– Leisure style game with pixel interface paying respects to classical designs. Both beginners and experienced players will have fun in it. 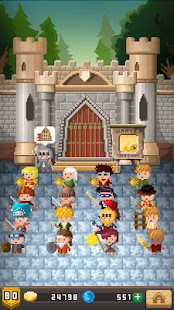