Summary:
* A new area of the Battlerealm has opened, and Ant-Man has found something curious within it…
* Quest through the new single-player campaign, Ant-Man’s Adventure!
* New Alliance Quests! Team up with members from your Alliance for real time, cooperative questing with this brand new feature!
* In addition to Ant-Man and Yellowjacket feuding throughout the Battlerealm, additional new Champions will be joining The Contest!
* Access more Masteries in the new Utility Mastery tree!

Ant-Man has discovered an shrunken section of the Battlerealm that requires his unique powers to investigate. While he was ant-sized, he noticed a battalion of tiny Adaptoids carrying tiny fragments of ISO-8 to a mysterious location. Help The Collector get to the bottom of this ant-sized problem with Ant-Man and more!

WELCOME TO THE CONTEST:
Iron Man vs. Captain America! Hulk vs. Wolverine! Drax vs. Deadpool! The greatest battles in Marvel history are in your hands! The greedy Elder of the Universe known as The Collector has summoned you to a brawl of epic proportions against a line-up of vile villains including Thanos, Kang the Conqueror, and many more! Experience the ultimate free-to-play fighting game on your mobile device…Contest of Champions!
SUIT UP WITH FRIENDS:
Ally with your friends and other Summoners to build the strongest Alliance. Strategize with your alliance, help them keep their Champions in the fight, battle to the top in Alliance Events and take on the new Alliance Quests together in new specially designed quest maps to earn exclusive Alliance rewards.
BUILD YOUR ULTIMATE TEAM OF CHAMPIONS:
Assemble a mighty team of heroes and villains (such as Iron Man, Hulk, Wolverine, Storm, Star-Lord, Gamora, Spider-Man, Deadpool and Winter Soldier) as you embark on quests to defeat Kang and Thanos and face the challenge of a mysterious new super powerful cosmic competitor, ultimately to prevent the total destruction of The Marvel Universe.
COLLECT THE MIGHTIEST HEROES (AND VILLAINS!):
Collect, level up, and manage your teams of heroes and villains wisely to receive synergy bonuses based upon team affiliation and relationships taken from the pages of Marvel Comics (such as pairing up Black Panther and Storm or Cyclops and Wolverine for bonuses, or making a team of Guardians of the Galaxy for a team affiliation bonus). The more powerful the hero/villain, the better their stats, abilities and special moves will be.
QUEST AND BATTLE:
Journey through an exciting storyline in classic Marvel fashion as you explore dynamic quest maps and engage in a healthy dose of action-packed fighting utilizing controls developed specifically for the mobile platform. Fight it out with a huge array of heroes and villains in iconic locations spanning the Marvel Universe such as: Avengers Tower, Oscorp, The Kyln, Wakanda, The Savage Land, Asgard, the S.H.I.E.L.D. Helicarrier, and more! 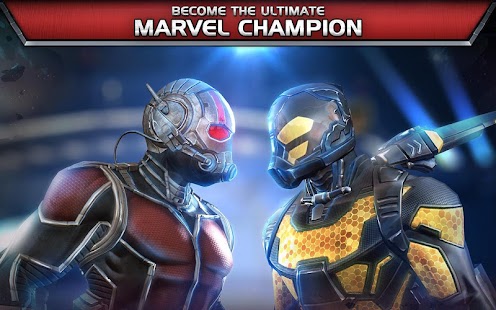 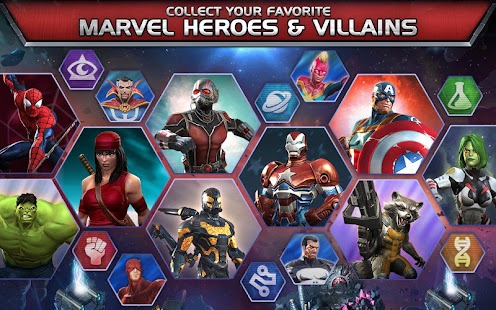 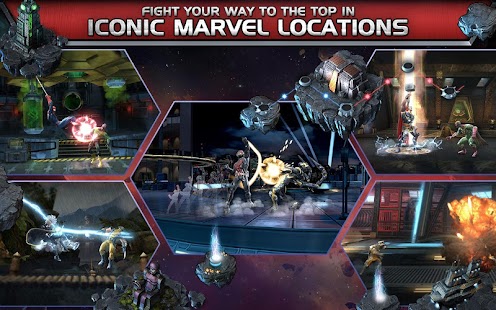