Petvengers: Super Hero Puzzle v1.1.1 [Mod]  Being attracted by the power of Magical Stones, a Villains Force were established and conquering around to own them and rule the galaxy.As long as 4 planets have fallen under the evil’s hand, the Villains force has aimed for the final target, the Earth with the Power Magical Gem Stone within.
But as goes darkness, so goes light, blessed by the Stone of Power, an small group of special animals has been gathered to stand agaist the Villains Force. The Earth has become a giant battlefield, fire seemed to swallow everything and reach to sky, columns of smoke.
Through many years of fighting, they also take back another Stones as well. With the new forces beside, many new blessed friends have joined the group and they become a strong alliance. Called themself Knights of Terra, they are the last wall to defend the Earth. The fight still continue until now… 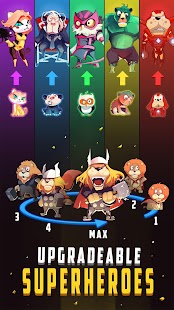