Toy Defense: Fantasy Towers v1.22.1 (Mod Money) Step into the role of a 10th-century commander and become the equal of Richard the Lionheart! Recruit and train your kingdom’s warriors, wizards, archers, and healers to create a powerful army and destroy the enemy’s forces! Defend your castle and show your courage to drive these vile monsters from your lands!

– Absolutely unique levels with non-recurring gameplay!
– Immerse yourself in a medievel fantasy atmosphere
– Incredible graphics with an amazingly detailed medieval environment
– Invite your friends to join you in a magical world!
– Cooperate or compete with your friends’ courageous knights
– Over nine types of enemies, from trolls and goblins to dragons and mercenaries
– Battle evil generals at the end of every wave!
– Develop your own unique strategy with six specialized tower power-ups
– Upgrade your warriors from peasants to knights and give your foes no quarter!
– Collect all the achievements, test your mettle on the battlefield, and enjoy a lengthy campaign!
– Four useful gameplay bonuses: meteorite, recovery, regeneration, and freeze
– Use the tactics of the greatest kings to win battles! 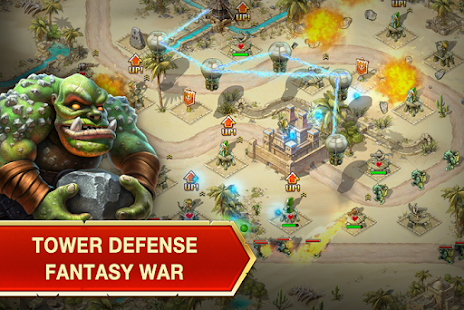