You Are A Knight v1.0.2 [Mod Money]  Start as a peasant and turn him into one of the greatest knights in the realm! You will fight other knights, joust, go on quests and get up to all sorts of chivalrous mischief in this light-hearted adventure from the creator of Swords and Sandals, Oliver Joyce.

You Are A Knight features
* Fast paced, turn-based combat. Each battle lasts under a minute!
* Fight, joust, go fishing, perform noble deeds on your journey to knighthood
* Fifteen tournaments featuring great historical knights like William Wallace and Richard the Lionheart
* Build up your knight through 50 character levels and learn powerful abilities like ‘Cleave’ and ‘Smite’
* Go on over 60 quests and attract followers such as The Vampire, The Baker and The Silver Stag
* Buy weapons, armour, potions and magical items from four different shops
* Over 170 achievements to earn and collect
*Hundreds of interesting trivia facts to learn about the middle ages 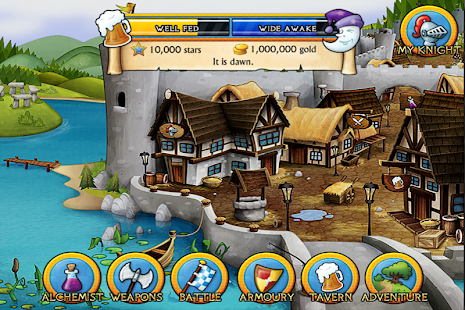